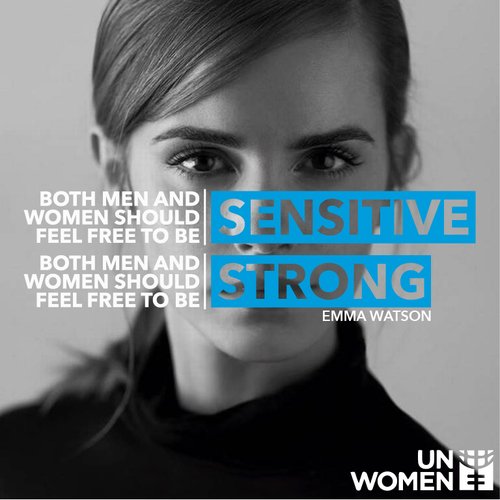 To be honest, prior to Emma Watson’s speech on Feminism at the UN, I did not have much of an opinion on feminism. It’s a topic that has come up in some of my college classes, but I never had an interest in learning more about it. Now, I am glad that I am starting to learn more about Feminism and what it means to be a young, college educated woman in the workforce. Even though I work in a female dominated field, I have come across situations where I have to get my point across to a room full of men and it was intimidating. I have always been a huge fan of Emma Watson, and after watching her speech, I have an even higher regard for her courageous step towards a brighter future.  Now, more than ever, she is a true role model for young women around the world.  Her speech was so moving and it is evident that she is passionate about this hot topic issue.

Before reading this article, if you have not watched the video yet, I highly suggest you do. It can be found here: http://m.youtube.com/watch?v=c9SUAcNlVQ4 . Her opening is extremely powerful.

She begins to explain that this should not be the case as feminism calls for equality for all. She recalls her own experiences of why she was considered “bossy” for wanting to direct plays or why her friends, who had such athletic talent, were quitting sports teams because they didn’t want to appear muscular. Hearing this, I kept asking why would they leave their talents? But quickly I realized that I have done things like this or have friends who have done such things. Feminism has developed a negative connotation. I had chills hearing the speech, especially when those in presence clapped for strong points that Emma brought up, such as women’s rights for her body.

Emma Watson was courageous in taking a stand and giving such a moving speech to the UN. She says, “If not me, who?” “If not now, when?”

As young women, we have the power to stand up and utilize how our individual talents  help other women and men everywhere to empower others and grow. Emma Watson standing up and having the courage to make this speech, knowing millions would listen to this and have their own comments, made me want to step out of my comfort zone and chase the dreams I have been scared of achieving. I want to achieve these ambitious goals, without thinking I’m being bossy or too forward for my age. It may take years for people’s mindsets to change, but Emma Watson’s speech shows that young women want this change, not only for women everywhere, but men as well. Gender equality can make all the difference for not only future generations, but hopefully our own as well.