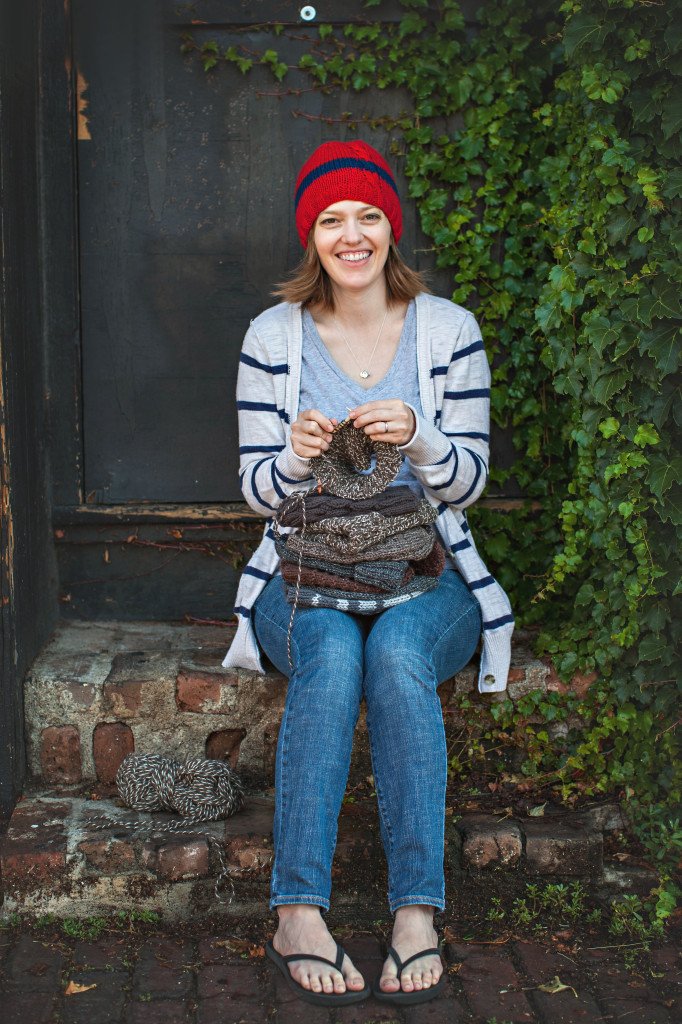 Robyn Devine getting her knit on and changing the world one hat at a time.

Each week we will introduce you to our (LYD) Live Your Dream Stars. These awesome women are changing the world through their dreams. Through their stories, we hope to inspire you to live your dreams.

This week we interviewed Robyn Devine. She is changing the world by knitting 10,000 hats and donating them to hospitals, homeless shelters and people in need around the globe. My goal actually began as a challenge to knit 100 hats in a year, using 100 different patterns. When I began the challenge I had been knitting for years, but I was not knitting regularly.  I wanted something to challenge myself, and at the time knitting two hats a week felt huge and amazing.

By the end of the challenge I was knocking out three and four hats a week, and I realized that if I donated all the hats I made, I could and would be able to do some tangible good in the world. Because I’d made 100 so easily, the idea of doing “just” 1,000 seemed like it would take no time at all. And so, without doing much calculating or advance planning, I picked 10,000.

2. How many hats can you make a year? When do you see yourself finishing your quest?

Before we had kids I was making over 200 hats a year. After we had Owen, I was still able to keep up that pace, thankfully. In 2014, when we added our daughter Lou to the mix, I know I didn’t make anywhere near 200 hats. However, this year I’m focusing on baby hats, which take far less time, so I’m hoping to get back on track!

3. Who do you donate your hats to?

I donate my hats to just about anywhere you can imagine. Baby hats go to maternity wards at both local and national hospitals.

I donate to oncology wards, homeless shelters, and non-profits that accept hats. Recently, I sent hats to a group that’s sending a wide variety of items to Syrian refugees.

4. During your quest to create and donate 10,000 hats have you had any setbacks?

I think last year felt in many ways like a set-back. With having a new baby, and getting used to life as a stay-at-home-mama to two little ones, I found I had far less time to knit than I imagined I would, and I know my hat count suffered. However, I also know that I’ll have far more years when these two little monkeys are grown and out of the house to knit whenever I want, so I remind myself of this when I get bummed that my hat count isn’t higher.

5. What advice would you give to young women following their dreams?

I feel like there’s a lot of people out there right now talking about following your dreams, and it’s so amazing! I think, especially for young women, it can feel like there are so many things that can change and affect your dreams (like having babies, in my case) that may deter you from dreaming big. But keep dreaming big, and keep going after those dreams!

I think as women we are built to multi-task, and to prioritize almost innately. This comes in handy when you’re pursuing many dreams at once – for me, I remember that everything has a season, and that means some days/weeks/months/years I’ll be focusing on one of my dreams more than others, and this is wonderful.

It can be so easy to stress out if your dreams aren’t coming true as fast as you want them to, but it helps to remember that you’re in this place, in this time, for a reason – to learn a specific lesson, to develop a certain skill, or just to be who you are in this moment so someone else can see that this step in the dream is possible! Live in your spot as fully as you can, because you’ll move forward soon enough!