Sure, Halloween is coming up and it can be very SCARY. What’s even more scary, though, is how much companies can go crazy with product tie-ins and how bad they can really get.

Twihards will be taking another bite of the forbidden fruit when the next installation of the Twilight saga, New Moon, will come out next month (November 20). With this, of course, comes the inevitable – product tie-ins you can only dream about (or have nightmares about).

This is my absolute FAVORITE Twilight product tie-in. I have no idea why, but I think it’s an absolutely hilarious grouping. Burger King …and Twilight??? Talk about a match made in hell. BK will be distributing these paper crowns in stores worldwide with “Team Edward” and “Team Jacob” designations.

While I may be a bit biased here because I absolutely despise Salt and Vinegar chips, I still don’t think the Pringles people really thought this one out. Is that the best tie-in they could come up with?

Ok so… 1) Tonner dolls are already pretty creepy. 2) These are REALLY ugly. I mean, I know Bella has some self-esteem issues, but since when does Edward look like a character from Team America: World Police?

My only question is…does it sparkle when exposed to sunlight? 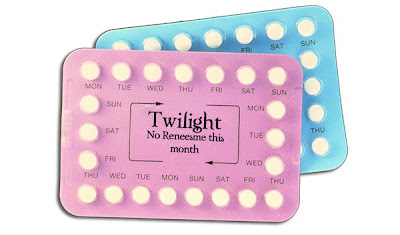 The clever tagline: “No Reneesme this month” – I am still struggling with whether this is real or just someone having fun on Twitter or Photoshop. I hope it’s not real. I just imagine all the sparkly synchronized swimmers in the commercial in matching black swimsuits…scary.

Once upon a time, candy hearts were an adorable Valentine’s Day staple, which managed to annoy a lot of people on that wonderful hallmark holiday. The New England Confectionery Co. took “I love you” and raised it a sparkly “Bite Me.”

The Twilight Bra has a Cullen crest on it. Now that’s definitely one way to scare a guy…