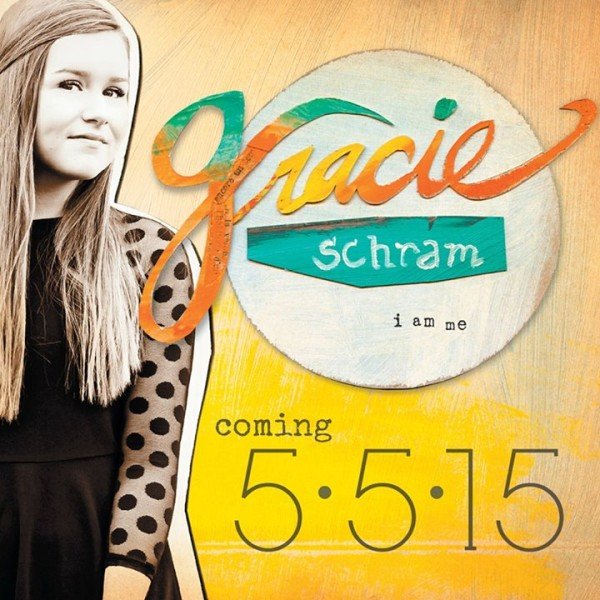 UPDATE: After two years writing, recording and countless trips, the time has finally come to release a new album. She has officially released her debut studio album!

Stay tuned! We have some exciting happenings involving Gracie coming up soon!

UChic’s very first Star Brand Ambassador, 16-year-old Gracie Schram is an up-and-coming singer/songwriter who shares the ‘Live Your Dreams’ mantra through her music and philanthropy. Her current album I Am Me marks Gracie’s first time working with a full-fledged producer, but, surprisingly, it’s not her first album. At the age of 10, she recorded and self-released a six-song CD to benefit underprivileged children in Haiti and Africa. The impressively polished Showers from God went on to raise more than $30,000 for The Global Orphan Project, and the follow-up 7-song release, Different, also benefitted charity. What do you do currently and how did you get here?

Right now I am a singer, songwriter and philanthropist, which really just means that about a week a month I’m writing and co-writing, having meetings with all kinds of people, and I’m singing all the time. The philanthropy part started when I was ten when I first heard about the terrible living conditions of the kids in Africa and Haiti.

At the time, I was only ten and I saw pictures of kids who were only eight or nine with a baby on their hip. I thought “Oh my gosh how hard would it be if I had to take care of my brother and my sister without my parents, without a house, without clean water living in these awful conditions. I felt like I needed to do something to help and it was my responsibility to take action.

I’ve been singing since I could talk and I started writing songs when I was seven so I thought what if I recorded a CD and gave all the money to those kids in Africa and Haiti. So, I made my first record when I was ten and another when I was twelve and through the profits of those CDs I was able to raise over $30,000 for orphans. I got to build two fish ponds in Africa and an orphanage in Haiti and through that I kind of realized how powerful music is.

At first I thought of it as a way to raise funds to help those kids but the crazy thing was that at the same time I was getting emails and letters from people saying ‘your songs inspired me’ or ‘helped me through hard times’.  So the music had a lot of power on its own. I started going back and forth to Nashville more often and I finally got to record my new record with Charlie Peacock.

How did you feel when you signed a deal with such a successful agent?

Actually it was the craziest thing, my old manager came to Nashville to work for Charlie. So, I went in and I met Charlie and I thought I would just kind of talk to him and get to glean some wisdom from the time that he’s spent in the music industry. Then he had me play some songs and he really liked them so he was like why don’t you hop in the studio and we’ll record something real quick. And the next day he sent me like a fully produced track and was like, “I want to record your record.”  It was crazy because usually it doesn’t happen like that, usually you have to ask them to do it. He just wanted to be a part of it so that was really amazing. It’s something that I’m really proud of and excited to do this year.

What has been the “highlight” of your career so far?

How did the trip to the orphanage in Haiti reinforce what you’ve been working towards?

I think a lot of people think that it’s going to be a life-changing experience but the weird thing was that when I got there when I was 14, I felt like I had already been there. I felt like they were already a part of my life and to get to meet them in person and build relationships was so incredible. Those are the most joyful people you will ever meet; they are generous and kind and happy and they just want to play with you and hold your hand. And then when I went back this year I was wondering if they would remember me and when I got off the bus they were like “Gracie, Gracie”, so the friends that I made last year totally remembered me and it was so cool to get to go back and see that lasting impact that I had made.

I got to share my music and they learned my songs, and to hear them sing was so cool. It’s definitely something that I want to be involved with going forward. It’s so important to do music for something bigger than just trying to be famous or trying to get however many fans. I want my music and my career to be something bigger than that. I want it to be music that has a message for people. I want it to be deep and help people become who they are.

Do you believe in specific moments or points in time when your purpose just clicks? If so, what has been one of your ‘aha’ moments? How did you seize that moment?

When I first heard my pastor talking about a trip to Africa that’s when I was like “I’m going to do something to help these kids.” When we ordered the first 1000 CDs I told my parents, “1000 is not going to be enough.” And they were like “Okay we’ll see” because a ten year old trying to sell more than 1000 CDs is crazy… and then I did.  I feel like from the beginning I felt like this was something that I wanted to do and performing at Youth 2011 was when I figured out that I was supposed to be performing and pursing my music career.

I think my biggest supporters have been my family because they’ve stood by me and encouraged me and helped me in any way that they could. They’re not in music at all, they don’t sing, they don’t play instruments, but they have just been extremely encouraging and my biggest cheerleaders in everything that I do.

My mom is an incredible networker and has been able to figure out how to use her connections in business to help in Nashville. She has also been awesome by coming with me to meetings because they weren’t going to send me there by myself. It’s just been really awesome to see how my whole family has rallied around my music and my career especially with the philanthropy stuff.

How did you get your family’s support?

After hearing about the terrible living conditions in Africa I said we shouldn’t have Christmas, we should just give everything that we would spend on Christmas to those kids. My parents were like “Okay, I don’t think your brothers and sisters would like that very much.” Then a couple days later they had kind of forgotten and I was like, “What if I made a CD?” I think that because they aren’t in music they always knew that I could sing but they didn’t really know that writing songs was special because they thought that to sing you had to write songs.

The reality is, many people singing are not writing the songs that you hear on the radio. I think that as we went along they realized more and more that I could do this and that it was really my passion. I still think that its always a crapshoot when you go into music because you could be the prettiest, you could work the hardest, you could have the best connections and it could still not work. It’s a huge risk because nothing is guaranteed but it’s something that I’m really passionate about and that I want to continue to do.

Tell us about an embarrassing moment and how you got past it.

When I was 11 or 12 I got asked to audition for America’s Got Talent and I got ready to go audition. I went into the room and I sang my song, which was “Somewhere over the Rainbow” and I was like this innocent little kid and after they were like “Do you sing anything more current?” “Do you sing any other songs?” and I was like “Yeah” and they were like “Well could you think of something” and I couldn’t think of any songs, like zero songs, not even “Happy Birthday”. So I’m just standing there and they’re like staring at me and then the only song that pops into my head is “California Gurls” by Katy Perry, which was a song that I’d heard on the radio maybe once or twice.

So I’m singing this song that’s like the exact opposite of what I would pick and then they look at me like “Oh my gosh what is she doing” and I get out of the room and I just laugh. That was something that was kind of ridiculous because I was so underprepared and I didn’t think to bring a second song. It was something that at first was kind of discouraging because I totally made a fool of myself, but it ended up being totally fine in the world even though I messed up my audition.

Be yourself and don’t try to pretend to be something that you’re not. Allow yourself to figure out what you’re really good at and what you enjoy. Figure out what you are passionate about and then go for it. Do whatever it is that you think you’re good at and know that one person can make a difference.  You can use your talent to help make the world a better place.

Want more great inspiration? Stay in-the-know with great tips from our Chicsters and LYDStars on our Facebook  and Twitter. Who are your favorite inspiring young women? Share with us in the comments below.