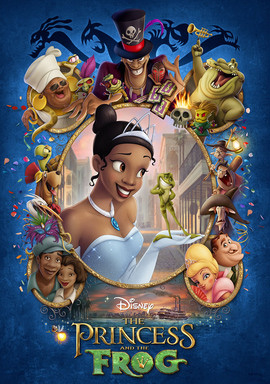 A month ago, I was worried that the racial controversy surrounding Disney’s first 2-D animated offering since 2004’s “Home on the Range” would rain on the film’s New Orleans based parade. Thankfully, however, the naysayers were silenced as, with Princess Tiana and her frog Prince Naveen leading the way “The Princess and the Frog” smooched its way into a $25 million opening weekend. Apparently, all it took for Disney (who lost its way during the mid part of this decade…I blame Hannah Montana) to reclaim its throne on top of the animation world was one fated kiss – and a couple shots of hot sauce.

I’ve been tracking this movie since I first heard whispers of it back in 2006. I devoured every article, every interview, every drop of juicy gossip I could get my hands on. In a word, I was stoked. So I ventured into the animated world of New Orleans circa 1920 with my hopes sky high – and I was not disappointed. Spicier than a pot of gumbo and more soulful than a southern church revival, “Princess” is the fluidly illustrated, colorful tale of a hard-working waitress named Tiana. Clutching to the memories of her smiling father and the goals he never lived to reach, she works tirelessly towards her dream of turning an abandoned mill into a restaurant. Nothing shakes her focus – not even a flirty glance from the womanizing Prince Naveen during the film’s opening number breaks her resolve, even for a second. She works two jobs, waiting tables at two different restaurants and at the end of the day, deposits every tip she earns into a collection of coffee tins hidden away in her room. We hear her hope and unshakable determination as she sings her dreams to life during “Almost There,” a gospel-reminiscent number belted out by former Dreamgirl Anika Noni Rose, who spends the entire movie proving that while she may have been relegated to the background while Beyonce and Jennifer Hudson battled for the spotlight in the 2004 movie adaptation of the musical, she’s got the pipes to give both diva queens a run for their weaves.

Her Prince Naveen is arguably the liveliest prince to grace the Disney screen since Aladdin (who technically didn’t become a prince until the end). While most Disney princes mainly exist to serve as accessories and arm candy for their princesses, the womanizing Naveen has a mind of his own. Voiced by Bruno Campos, Naveen remains for the most part upbeat and optimistic throughout the film, despite his…unique…predicament. And while he’s a bit immature at the beginning, he hops his way towards a growing sense of a responsibility by the end, thanks in no small part to Tiana, who learns to let her hair down every once in awhile and have some fun. The supporting cast of characters, including the jazz loving alligator Louis (Michael Leon-Wooley), the Cajun bayou-dwelling firefly Ray (Jim Cummings), Tiana’s spoiled best friend Charlotte (Jennifer Cody) and the old voodoo priestess Mama Odie (Jenifer Lewis) add a colorful backdrop to their tongue-crossed romance, each adding their own brand of spice to the bubbling gumbo stew.

No Disney movie is complete without a wicked villain, and “Princess” is no exception. Keith David’s Doctor Facilier isn’t as in-your-face as villains past – his evil is of the quiet variety, the kind that slithers out of the darkness like a preying snake, and by the time you realize its surrounded you, it’s too late. Doctor Facilier is also known as “The Shadow Man,” a fitting name for a voodoo magician who manipulates the shadows around him to do his dastardly bidding. His song “Friends on the Other Side” reminded me of watching The Lion King’s Scar glower through his number “Be Prepared.” Despicably evil and visually stunning, the song took the audience right back to the childlike wonder that characterized Disney days gone by.

With a soundtrack that blends all the best flavors of blues, gospel and jazz, witty dialogue and even a tear jerking moment or two, “Princess” is 90 minutes well spent – and an important addition to the Disney line up. Finally, young African American girls have a Princess of their own to look up to. A friend of mine took her pre-school age niece to opening night, dressed up to the nines in Tiana’s soon-to-be-iconic lily pod dress. Hearing about it made me smile, remembering how my princess mentality (that I still haven’t shaken) always had me wishing there was a Disney Princess who looked like me while I was growing up. While I may not have had a Tiana in my childhood, the younger generation will. There was a lot of expectation riding on this film, a lot of concern as to how Disney would handle the story of an ethnic princess in an interracial relationship, set in an extremely racially charged city. Tiana had a big crown to wear, and she more than rose to the occasion. In every way possible, “Princess” recaptures that old Disney magic that we grew up with. “Kissing would be nice, yes?” Naveen asked Tiana during their first fated meeting. The answer, of course, is a resounding yes – and a big, wet kiss right on the lips.