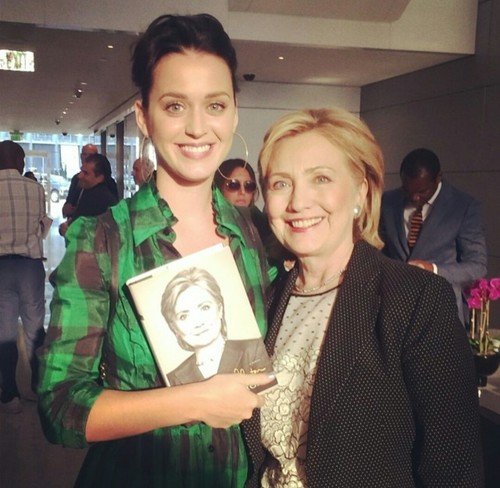 As we start a new year, oftentimes we look to aspire to become someone or something new. Embody a new persona, a new mantra that will not only inspire us but drive us to be better. With all this newfound (and yes, sometimes short-lived) introspection, take a look at four ladies who are already nailing it in 2015 and just might inspire you to be a more powerful, resolute you!

Hillary Clinton
Aside from the obvious political impact, Hillary and the Clinton brand are taking 2015 with a vengeance. This past year alone, the Clinton Global Initiative brought together key leaders in business to discuss challenges of today to prepare for tomorrow. Hilary continues to push for greater opportunities for women in developing nations while inspiring women in her own country to become a more impactful person by stepping outside conventional roles. A new grandmother, Clinton is not slowing down anytime soon. Making her mark on American and global history with the help of her family, the Clinton name will surely be on everyone’s mind this 2015.

Reshma Saujani
The founder and CEO of ‘Girls Who Code’ is inspiring women from an early age to defy what’s expected and turn conventional gender norms on its head. By spearheading a movement for schools, top engineering firms and immersion programs, Saujani is reinventing an entirely male-dominated market. Girls Who Code aims to provide computer science education and exposure to 1 million young women by 2020, and in 2014, just two years after it’s conception, Girls Who Code clubs have been implemented in schools across the country. Girls Who Code was even a vital part to Google’s contribution to the White House Christmas Tree lighting in Washington, DC. Girls across the globe were able to code different light shows displayed on the nation’s tree for thousands of visitors. Saujani’s impact on young and career-minded women alike is something sure to light everyone’s fire this 2015.

Debbie Sterling
In the same sentiment of Girls Who Code, another woman who is hell-bent on making the world a more equal (and fun) place for young women, Sterling gives us GoldiBlox, a movement that is ‘determined to change the equation. Part toy company, part empowerment group, GoldieBlox is showing girls across the globe to tap into their storytelling and verbal skills to boost their confidence in a field they might otherwise say no to. In a world where men largely outnumber women in science, technology, engineering and math, GoldieBlox has helped put a universal perspective, not just solely female, on the ways women can revolutionize dozens of skill sets.

Malala Yousafzai
Fresh off her 2014 Nobel Peace Prize win, Yousafzai is continuing her work in promoting children’s education around the world. Through her Malala Fund, women from the most dire of situations are given a voice and a chance at the education they rightly deserve. At the end of 2014, following a deadly attack at a Pakistani school, Malala used her platform to speak on the atrocities that continue to ravage her home country but countries around the globe. Too often, women in struggling or war-torn communities are pushed aside, seen as a liability if given too much knowledge. But Yousafzai is continuing to pledge herself to creating and implementing policy at the international and national levels in order to provide quality education to children in need.